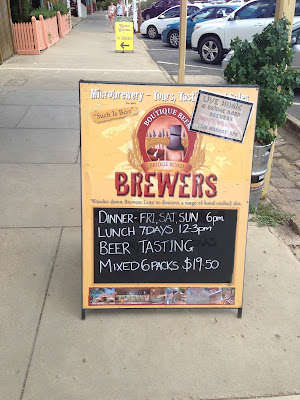 For a while now Bridge Road has been one of my favourite Australian breweries, so the fact that I'd never been up to visit the brewery was a criminal act of the most heinous variety.

An unassuming location from it's facade, but inside it's humble entrance was an oasis.

Once you're within 30 meters of the entrance you can smell pizza. Wonderful, mouthwatering pizza. The aroma only intensifies as you get further inside. It's one of the best smelling places I've ever been to.

Second only to the Russian delicatessen on Koornang Road, but that's another blog altogether.

It's a long weekend, so the place was pretty much packed. Any seat would would do us. What's that over there? An empty four seater? Score!

Grabbed the first round of beverages and sat down, basking in the glory of enjoying some of the countries best beer in their intended environment.

We could stay here for hours.

After a few minutes we got asked to leave as we'd actually wandered into the seats that belonged to the cafe next door, and they weren't licensed so they did not want to see us in their seats at all.

Again, on a seat finding mission we were lucky enough to get a legitimate four seater almost straight away. 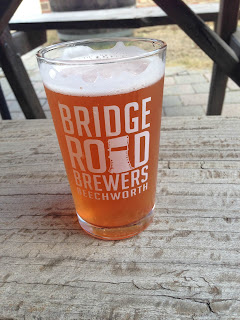 One of my favourite pale ales, the Beechworth Pale was tasting spectacularly brewery fresh, while the newest kid on the block, the WalDo saison was especially popular on the hot day.

On the table next to us was a group of scumbags that I would have ignored had it not been for this upcoming anecdote.

It was a hot day, and on the drinks menu was a cracking solution to hot day. A Robust Porter float with vanilla bean ice cream. The scumbags at the next table also got the porter floats when we got them.

...were the comments coming from the loudest scumbag from the scumbag table. This piqued my curiosity of course as the tastes that I was getting was chocolate, coffee and ice cream. It was gorgeous. One of the better floats that I've had.

“It tastes like chocolate, coffee and ice cream or some shit man. That is shit.”

Another pearl of wisdom from the loud scumbag.

He was right though, that's exactly what it tasted like but it was awesome. 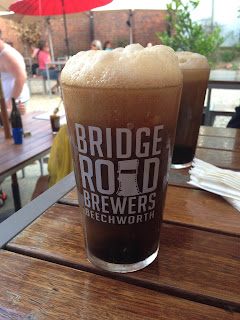 I was lucky enough to make eye contact with the loud scumbag as he was delivering his expert analysis of the beer and said “What's wrong with you?!”.

It got a laugh from his co-conspirators, but did not get me any closer to finding out what was wrong with him.
A home made pretzel was enjoyed (like, a lot) and all was well.

Beechworth is a gold rush town that's absolutely picturesque and the brewery integrates seamlessly with the historic appearance of the building and town.

Bridge Road Brewery has now been ticked off the list and all feels right with the world.

I will certainly be back.